“Around the Ijsselmeer”: Bike and Sail North Holland. This is a bicycle tour of Holland on a 3 masted , Leafde fan Fryslan. We sailed around the Ijsselmeer which is a freshwater lake of 425 sq. miles. It was formed by the building of a man made dike closing off the North Sea.

I did this trip with my daughter-in-law, Annette Vannice. We shared a very small cabin on the schooner. Some of the highlights are featured in the following photos. We booked this through Vermont Bicycle Tours and it was fantastic.

We started the trip with a stay in Amsterdam for a few days. Annette and I toured The Hague and the quaint neighborhoods with the canals, house boats, and lots of bicycles. There are more bikes than cars and it was an adventure to make sure we stayed out of the bike lanes.

March 29, 2017 We are only here from 2pm until 6pm but the daylight is long and we enjoy the tour we have chosen which takes us to Tierra del Fuego, national park of Argentina. Ushuaia is known for the end of the Pan-American Highway which runs from Prudhoe Bay, Alaska to the tip of South America. We had our photo taken at the southern end in Ushuaia. Tierra del Fuego is an archipelago at South America’s southernmost tip, shared by Chile and Argentina. It’s known for its dramatic landscape of snowy mountains, glaciers, tundra and wind-sculpted trees. Its main island, Isla Grande, is home to the Argentine resort town of Ushuaia. Sometimes called “the End of the World,” Ushuaia is a gateway to the region and Antarctica to the south.

3/28/2017 Our next stop is almost to the tip of South America in Punta Arenas Chile. See map for location. This is a cute little town and we made straight for the closest cafe with free Wi-fi. Wonderful hot chocolate and pastries! It was a bit chilly at 54 degrees so I climbed the hill for views of the harbor and town below.

3/26/17 The Falkland Islands are 1,050 miles south of our last port of Montevideo, Uruguay. After 2 days at sea we are ready to get off the ship and see PENGUINS!

North Pond Penguin Colony is one of the areas to see Gentoo and Magellan penguins in their natural environment. It is a 2 hour, 60 mile drive across the island and we are in a Land Cruiser with Gus, the owner of the tour company. There are 16 vehicles, all 4WD for driving across the peat bogs. We are spread out so there is no crowd at the penguin colony. Half way along we stop at an old sheep farm for lunch.  I’m lucky to sit in the front seat with Gus and enjoyed our conversation about the lifestyle of this area. The Falkland Islands are a British Colony off the southern coast of Argentina. In 1982 Argentina tried to take it back-you may remember The War of the Falklands. A 10 week war was interesting to hear about from Gus, our driver, as he was in high school when this happened. Scary times for sure. Since the colony had no defenses, Britain sent the ships immediately and bombed the heck out of the Argentine ships and shot down their airplanes. The wrecks still exist on the ground and in the sea. The Argentines also left thousands of land mines behind so many open lands and beautiful beaches are closed for safety. Eventually they will clear this out but it is not a high priority.

Article from Wikipedia: “The British government regarded the action as an invasion of a territory that had been a Crown colony since 1841. Falkland Islanders, who have inhabited the islands since the early 19th century, are predominantly descendants of British settlers, and favour British sovereignty. Neither state officially declared war, although both governments declared the Islands a war zone and officially recognised that a state of war existed between them and hostilities were almost exclusively limited to the territories under dispute and the area of the South Atlantic where they lie.”

My own research says the islands main industry is fishing, seconded by wool. At only 3,000 residents, we found it charming and quaint. There is no high school and the children are shipped off to England boarding school for high school education. All of this is paid for by Britain, including the seasonal vacations. The people are friendly and proud of their homeland. 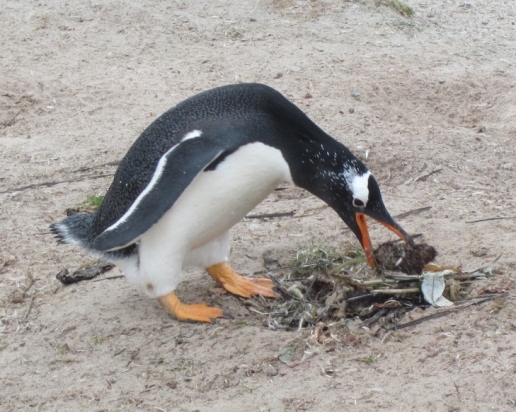 After our tour we had a couple hours to enjoy Port Stanley, where 90% of the population lives. The area is quaint and tidy with just one market. There are a few pubs but most were closed for Sunday. We did find a chocolate shop though and the clerk asked who we toured with – knowing that we most likely went out to see the penguins. We told her it was Gus and he is her cousin. I assume everyone is a cousin to some extent. Such warm and friendly people.

We are finally at sea. The Zaandam departed Montevideo, Uruguay on March 23rd at 6pm. The weather is 77 degrees, calm winds. This photo shows our favorite part of the ship. This is called the Promenade Deck because you can walk all the way around the ship on this deck. Outside! Four times around is one mile. Our cabin is just to the right of where I am standing taking the picture of the sunset. We have a window and could see this beautiful sunset. Those chairs have soft cushions where we lounge most days after lunch on sea days. Ahhhh. Our favorite part of cruising – after I have rounded this deck about 12 times anyway.

3.23.2017 The Zaandam departs Buenos Aires at 6pm on the 22nd and we travel north 141 miles across the wide river to Montevideo, Uruguay. We arrive 5:30 am on the 23rd. This lovely city is so different from Buenos Aires. The government is stable and the people are hardworking and love their country. Montevideo has consistently been rated as having the highest quality of life of any city in Latin America.

I chose a tour offered by a local company just outside the port. They had wi-fi on the bus and for $20 the 3 hour tour was perfect. We went shopping at a local craft market where I bought a scarf. He said his wife made it. Possible!

3/22/2017 We are on the ship overnight in Buenos Aires and had one more place we wanted to see so we signed up for a ship’s tour of Tigre Delta. It is a unique suburb built around the swampy land and meandering waterways that empty from the Rio Parana into the Rio de la Plata. There are water logged shacks next door to high end homes. Everything is delivered by boat and everything goes out by boat.

We have a stop between the harbor in Buenos Aires and Tigre Delta. The dominate message here was graffiti. It is everywhere and I think they just leave it instead of painting over because it will come back. This is in San Isidro, Buenos Aires’ most affluent community according to Trip Advisor. They do have a lovely chapel and nice chocolate shops. No graffiti on the chapel – hmmm. 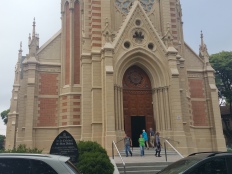 3/21/17 If you have been following along, this whole trip started because we did not want to fly back from Costa Rica. Now, nearly 3 weeks after Costa Rica we are boarding the ship TODAY, March 21st. 36 days from now we will be in Vancouver Canada boarding the Amtrak home! Obviously it has been amazing so far and will just get better as we go south to the tip of South America, swing around Cape Horn and head north.

3/11-13 We flew from Cusco back to Lima, picked up our stored luggage from the hotel and boarded our flight to Buenos Aires. We stayed just one night in our BA hotel – Riva Urban Lofts – stored our luggage again and flew from the little domestic airport over to Iguazu Airport for our three day tour.

We have a tour through 01Argentina and they have arranged everything. Hotel, transport and tours. $860 total for both of us 3 days/2 nights. Our hotel is Arami right in town. Easy walk to shops and restaurants. Not too impressed with the town but the falls were amazing. We toured the falls all the first full day. Did the train to Garganta del Diablo then walked the trail loop to Devil’s Throat. Then we took the train again to another area and walked a much longer loop called the Upper trail. About 3 miles in all. Bob did not do the second trail but enjoyed the rest in the shade. It was very hot and humid.

Again, these falls are huge. MASSIVE in fact. Pictures don’t describe but here are some: 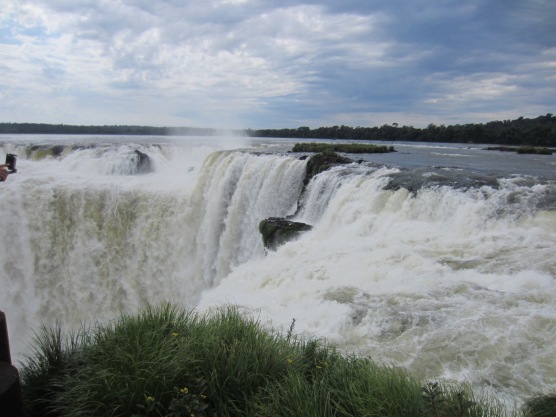 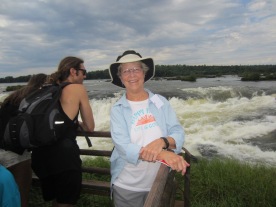 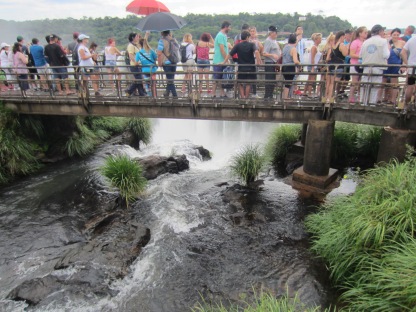 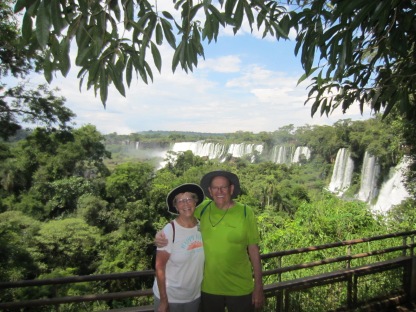 Proof that we were there

I’m not going to write much about this because you just have to see it for yourself to appreciate it. I put this on our schedule long after I booked the Costa Rica/Cruise trip. I did so much research to be fully informed. There is no way to describe it and seeing pictures does not do it justice. Yes, it is difficult because the steps are steep and uneven. It is huge too. But our guide was great in describing what life must have been like for the residents. They left no writings nor history. It is not known why they left except possibly in self defense. So go see it yourself. But do it soon. The Peru government has approved a large international airport in the Sacred Valley which will eliminate the transfers from Lima or even Cusco. It will be easier and cheaper to get there which means more people. They limit the number of visitors now so I’m not sure how they will handle it. The 2.5 hours transit in vehicle from Cusco is beautiful. Then the train is equally beautiful. You CANNOT DRIVE THERE! But you can do the overland trek which takes 4 days and you must have a guide. 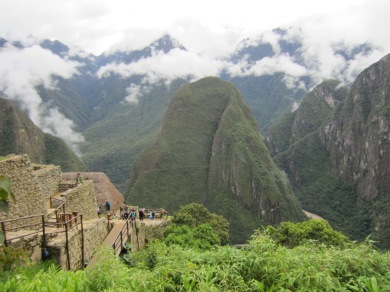 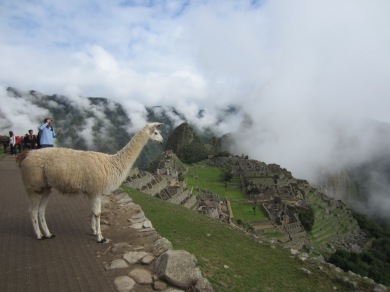 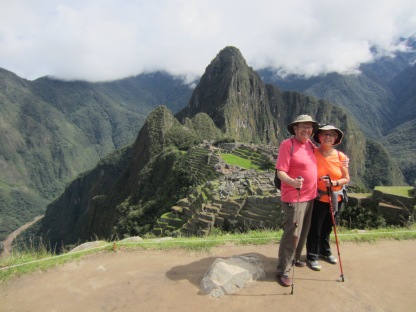 Proof we were there